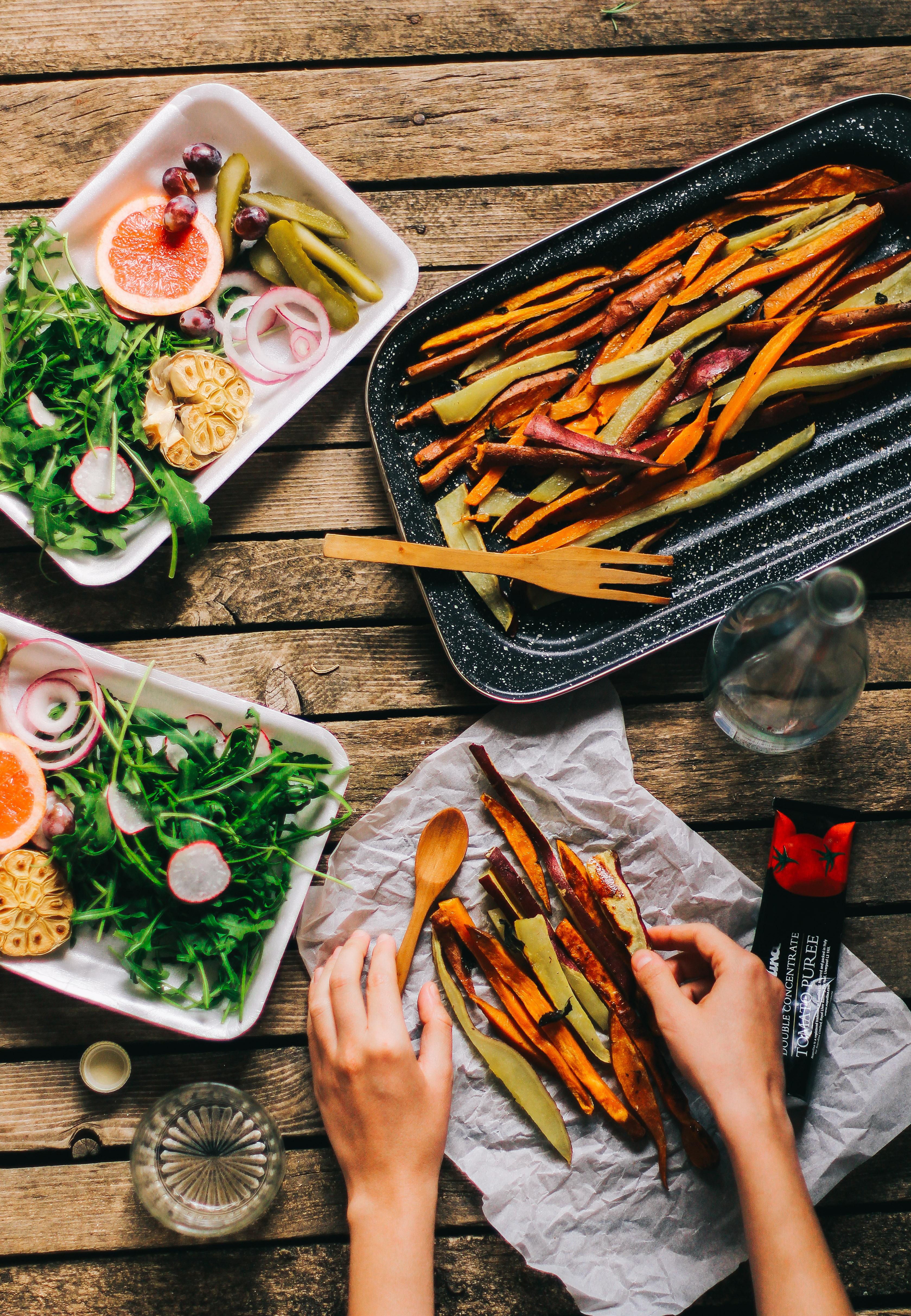 By now most of us are aware that what we eat has a big impact on our physical health, but can the food we eat also influence our mood and mental health too? Research suggests that yes it can!

Several studies have shown that certain diets and diet quality may help to reduce the risk of depression.

Many observational studies have linked a healthy diet to a reduced risk of depression. A meta analysis looking at 21 different studies found that ‘A dietary pattern characterized by a high intakes of fruit, vegetables, whole grain, fish, olive oil, low-fat dairy and antioxidants and low intakes of animal foods was apparently associated with a decreased risk of depression’.

Another study concluded that those with better quality diets were less likely to be depressed, whereas a higher intake of processed and unhealthy food was associated with increased anxiety.

The DASH diet rich in fruit, vegetables and wholegrains and low in saturated fat and added sugars which is commonly used to treat high blood pressure may also help to lower the risk of depression. One study found that over a 6.5 year period, those who had the closest adherence to the DASH diet were 11% less likely to develop depression than those who followed a Western style diet (high in saturated fat and low in fruit and veggies).

Other studies have found that ‘traditional diets’ such as traditional Mediterranean, Japanese and Norwegian may also reduce the risk of depression.

Keep in mind that these studies show associations between diets and depression and not a cause and effect.

Key message: Observational studies show that diets rich in whole-foods, wholegrians, fruits and vegetables and low in saturated fat and proceed foods are associated with a reduced risk of depression.

One of the most promising research studies looking at diet and depression is The SMILES trial. This research revealed that people with existing moderate to severe depression were able to improve their mood and reduce their depression through diet and nutrition. The study involved a group of 67 men and women who were taking antidepressant medication and/or getting therapy from a health professional. Half the group were prescribed a modified Mediterranean style diet called the ModiMedDiet and attended sessions with a qualified dietitian. The other half of the group did not receive any dietary support or advice but attended a social support group. The participants depression severity was measured before and after the study using an assessment scale called the MADRS scale. After 12 weeks the group following the ModiMedDiet diet reduced their score by an average of 11 points. 10 people in the group actually had scores so low that they no longer met the criteria for depression! The participants in the other group reduced their score by an average of 4 points.

Key message: A research study revealed that participants with existing depression were able to improve their mood and reduce their depression through food and nutrition. After 12 weeks of following the prescribed modified Mediterranean style diet some participants no longer met the criteria for depression.

What is in the ModiMedDiet diet?

First of all the ModiMedDiet wasn’t designed to be a weight loss diet. The participants didn’t have to reduce or count calories, the main focus was on nutrient rich foods and diet quality. The daily diet was rich in wholegrains, fruit, vegetables, dairy, olive oil and nuts. Legumes, lean red meat, fish, poultry and eggs were also included across the week. ‘Extra foods’ such as sweets, fast food, refined cereals, fried foods and processed meats were discouraged, and allowed a maximum of 3 times per week. 2 standard alcoholic drinks were allowed per day which were encouraged to be red wine and consumed with meals. The diet is rich in fat with 40% of energy coming from fat (22% monounsaturated fat), 37% coming from carbohydrates and 18% from protein. The diet was designed to be easy to follow, manageable and sustainable and 31 of the original 33 participants in the ModiMedDiet group adhered to the diet and completed the 12 week study.

Key message: The main focus of the ModiMedDiet was nutrient rich foods such as wholegrains, fruit, vegetables, low fat dairy, olive oil and nuts which were consumed on a daily basis.  Legumes, lean red meat, fish, poultry and eggs were also included across the week and highly processed foods were limited.

What specifically in the diet helps to reduce the symptoms of depression?

Well there’s no clear answer as to how exactly depression symptoms are reduced when following the diet. There are some possible biological pathways in which dietary interventions could improve depression such as by reducing inflammation and oxidative stress and changing gut microbiota. While certain nutrients may also play a role in mood regulation such as selenium, vitamin D, B vitamins, antioxidants and omega 3 fatty acids it is important to note that the study took a whole-diet approach rather than  focusing on specific foods or nutrients.

Perhaps as research in this area continues to grow and new evidence emerges specific diets may become a routine part of treatment options for depression alongside medication and therapy.

Mood Food (a guide based on the research):

* The ModiMedDiet included 3-4 serves of lean, unprocessed red meat and 2-3 serves of chicken per week. However, traditional Japanese diets are lower in meat and poultry and richer in fish and soy. Traditional Norwegian diets also contain lean meat but more emphasis is placed on fish and seafood.

Just like any medical condition it is important to discuss treatment and management plans with your health care team.

For further information about depression contact beyondblue on 1300224636 or talk to your GP. If you need help in a crisis, call Lifeline on 13 11 14