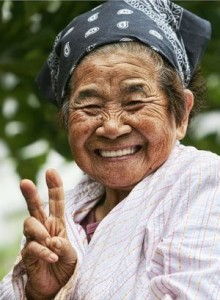 Centenarians, what a fascinating bunch of people!  Imagine living for over a century, imagine all of the experiences, knowledge and wisdom that you would have. There is a lot to learn from this unique group of people. With the average life expectancy in most developed countries around 80 years how do they manage to live 20-30 years longer?!?! They must be doing something right! I know genetics would play a big part but I’m certain that lifestyle factors can also be credited for making it into the 100+ club. Being a dietitian and knowing how much food and nutrition can impact on health & wellbeing I like to think that their food choices helped them to reach a ripe old age. So what are their nutrition secrets? What is their fountain of youth, their elixir of life, their superfood? Let’s find out what these remarkable people have to say…

Besse Cooper who lived till she was 116 claims that the secret to a long life was to “Mind your own business and don’t eat junk food. Treat everyone the way you want to be treated, work hard and love what you do.” Oh bless her soul how gorgeous! What great advice.

Bonita Zigrang, (108) claims that to live a long life you must ‘Have a good appetite, lots of friends and keep busy’.

‘Stay active…even at 100. Eat in a balanced way…’ was the advice from Benjamin Goldfaden, aged 99.

According to Samuel Ball (102) you don’t even need to shun the booze… ‘Have a good wife, two scotches a night and be easy going’.

Helen Mulligan thinks it might even cure a cold… ‘Take it easy, enjoy life, what will be will be. Sleep well, have a Bailey’s irish Cream before bed if you have a cold – you will wake up fine the next monring’.

Morris Lensky (101) gives prunes the tick of approval ‘You have to be lucky, but I made the best of things when bad things happened. I also ate prunes every single day.

Apparently Jeanne Louise Calment who lived till the age of 122 ate 2 pounds of chocolate every week and was very fond of a glass of port wine. When asked what her secret to a long life was she said she drank wine, ate chocolate, and used olive oil in her food every day.

So it turns out bacon may be a superfood after all! Pearl Cantrell aged 105 says her successful aging is due to eating bacon for breakfast!

Li Aizhu has a simple explanation for her longevity claiming that her secret is that she eats a lot of peanut oil….If that includes peanut butter I’m going to live till I’m 1000!!

Dr. Leila Denmark who lived to be 114, was a paediatrician who continued working till she was 103! She attributes her long life to ‘drinking only water and including a protein and two vegetables with every meal’.

Another golden oldie is Dr Shigeaki Hinohara (101). When it comes to his diet he keeps it pretty basic  “For breakfast I drink coffee, a glass of milk, and some orange juice with a tablespoon of olive oil in it. Olive oil is great for the arteries and keeps my skin healthy. Lunch is milk and a few cookies, or nothing when I am too busy to eat. I never get hungry because I focus on my work. Dinner is veggies, a bit of fish and rice, and, twice a week, 100 grams of lean meat.”

Okinawan centenarian Louis Charpentier, aged 99 says “I don’t eat very much, but I always eat a fruit, a vegetable, and a little meat, and always make sure that I get sardine and salmon at least once or twice a week.”

And who would of thought that the secret to making it to 99 is to “Try not to eat anything that’s healthy. It’s true. I eat whatever I want. The secret to longevity is ice cream.” Maybe Paul Marcus’ is on to something! I certainly wouldn’t oppose to icecream being the next superfood!

Mr David Henderson, who lived to 109, credits his old age to porridge, prunes, and never going to bed on a full stomach.

Raw eggs and plenty of sleep helped Emma Morano reach her 114th birthday. She ate 2 eggs everyday – one cooked and one raw.

Claudia who is just shy of her 100th birthday says ‘you just keep working and you eat minestrone, beans and potatoes’.

So there you have it, some insightful comments from those who have lived long and flourishing lives. As you can see they all have varied diets but the overall theme was a balanced and simple diet. Many included foods that have recently been labelled by some as ‘toxic’ or foods that should be avoided such as beans, legumes, fruit, potatoes and even icecream, chocolate and alcohol!. These prestigious people don’t count calories, they don’t avoid gluten they just eat simple, enjoyable food.

While these are quotes from a select few of the oldest living people, research into centenarians especially those living in the notorious ‘blue zone’ indicates that most enjoy a diet of fresh minimally processed food of seasonal fruits and vegetable, beans, nuts, seeds and grains.

We know food is only one aspect of a healthy lifestyle. The common factors that these long lived folk claim helped them hit 100 were: being active, keeping busy, perusing the things that they were passionate about, having a positive outlook, relaxing, not stressing, love and of course good luck!